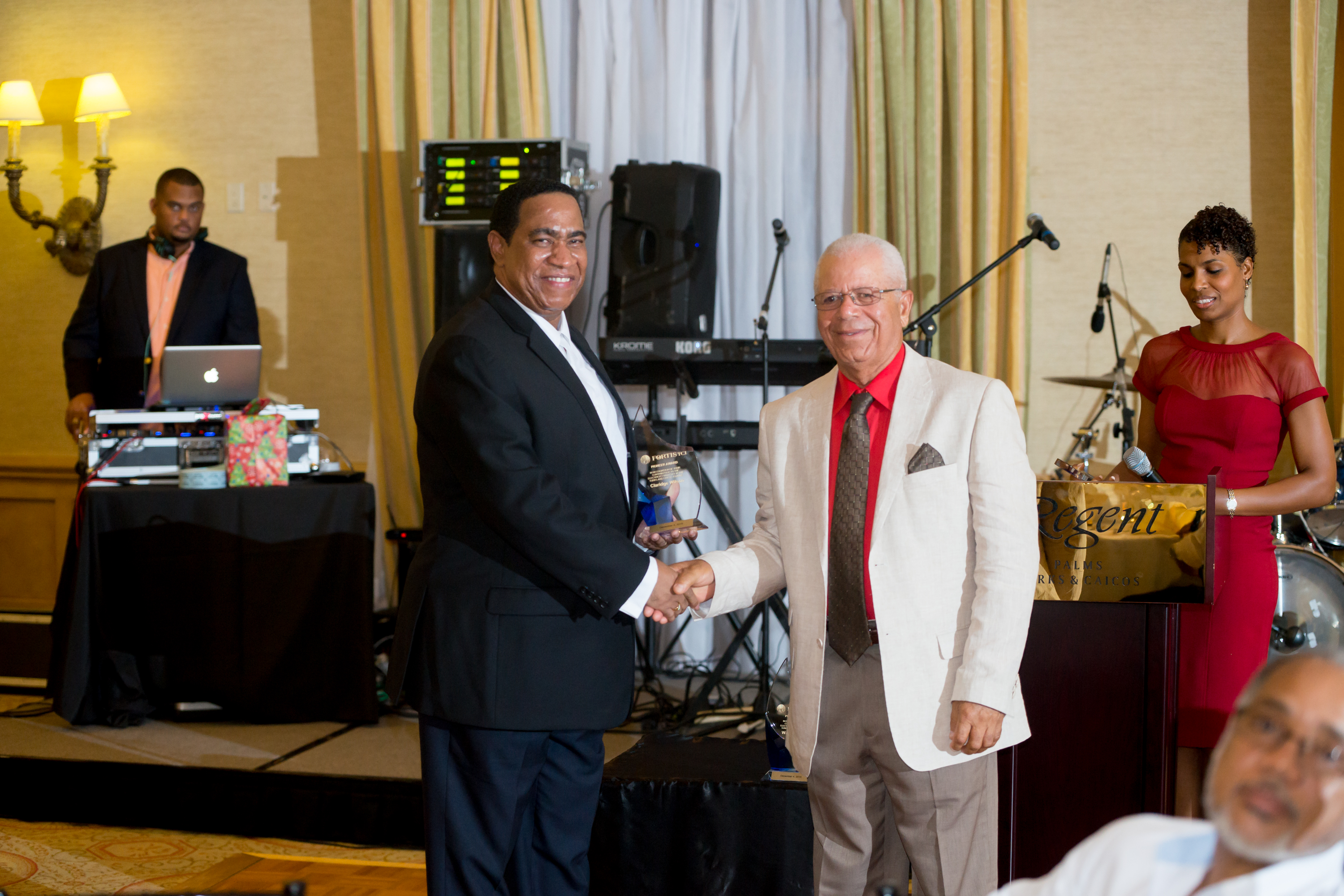 Providenciales, Turks and Caicos Islands (Thursday, December 17, 2015) – FortisTCI recognizes five former electricity utility industry professionals, honouring them with the FortisTCI Pioneer Award. This will be an annual award meant to recognize a broad cross section of individuals that have contributed to the electricity industry in the Turks and Caicos Islands. This year’s honourees are Mr. Claridge Wilson, Mr. Ernie Jackson, Mr. Wayne Douglas, and the late Mr. Eric Seymour (represented by his wife Mrs. Gladys Seymour) and the late Mr. Ken Lighbourne (represented by his son Brian Lightbourne).

In an industry that is now rapidly changing and evolving through the technological age, the FortisTCI Pioneer Award is an acknowledgment to those that set the foundation and significantly contributed to the growth and development of the Country’s electricity industry. FortisTCI President and CEO Eddinton Powell said, “The Turks and Caicos Islands can boast of having one of the best electricity services available in the region. We recognize that to get where we are today it took great knowledge, tremendous vision, and great workmanship by notable industry professionals. We honour these individuals who have blazed the path as Pioneers, and the torch of service and excellence has been passed on to a new generation.” The Company has plans in 2016, to create a wall of honour to publicly display the names of ‘Electricity Industry Pioneers’ at its headquarters in Providenciales.

The late Eric Seymour is a former Power House Supervisor, Chief Engineer, Electrical Superintendent and Electricity Commissioner that served the Turks and Caicos Islands from 1969 to 2003. He gained his initial training and experience as a Merchant Marine with American Coast Lines where he worked his way from a junior engineer in 1953 to Chief Engineer in 1969. He eventually joined the TCI civil service and served as Chief Engineer and Electrical Superintendent. During this time, he oversaw the erection and distribution of electricity to many areas of the Turks and Caicos Islands that had not had

electricity previously. In 1992, he took up early retirement from the civil service and took the opportunity to serve his country as Electricity Commissioner, a post he held until he retired completely from active duty in 2003.

The late Mr. Ken Lightbourne began his service with Provo Power Company (PPC) as an operator in 1989. A former line superintendent he was known as one of the first to take safety seriously. He also had a passion for developing employees who worked in Transmission & Distribution and took pride in helping them grow professionally. When he passed away in 2002, he was serving as the Company’s Superintendent of Distribution.

Mr. Claridge Wilson served with Provo Power Company as the electrical plant superintendent, having been employed by the Company from 1992 until 2005. A well respected professional in the industry, he played a major role in the installation of Caterpillar engines at the Provo plant. He was also responsible for day-to-day plant maintenance throughout the Caicos Islands.

Mr. Ernie Jackson, an electrical engineer by trade, joined PPC in May 1998 as Chief Engineer. He led developments and upgrades on the T&D Systems throughout the Caicos Islands. One of his many major projects was the conversion of overhead lines in Grace Bay to underground. He was promoted to FortisTCI Vice President of Production and Engineering in September of 2007 and served in this capacity until his departure.

Mr. Wayne Douglas joined PPC in November 1998 as Plant Mechanical Superintendent and is known as a friend to all. On the job he believed in teamwork, family, and community, possessing a knack for keeping people motivated. His professional skills were fabrication and mechanical engineering. He had since served as a consultant of Special Projects with FortisTCI. His role was instrumental in the logistics and commissioning of the new Wartsila Engines.

1) FortisTCI Limited (FTCI) is a wholly owned subsidiary of Fortis Inc. located in Newfoundland, Canada and is the sole provider of electricity in Providenciales, North Caicos, Middle Caicos, East Caicos and adjacent Cays, and South Caicos. In August 2012, Turks and Caicos Utility Limited (TCU), which is the sole provider of electricity on the Islands of Grand Turk and Salt Cay, was acquired by FTCI. Together the two companies serve more than13, 500 electricity customers in the Turks & Caicos Islands archipelago. FTCI and TCU have an aggregate diesel-fired generating capacity of approximately 75 megawatts. For additional information, visit FortisTCI

2) Fortis is a leader in the North American electric and gas utility business, with total assets of approximately $28 billion and fiscal 2014 revenue of $5.4 billion. Its regulated utilities serve more    than 3 million customers across Canada and in the United States and the Caribbean. For more information, visit www.fortisinc.com or www.sedar.com.